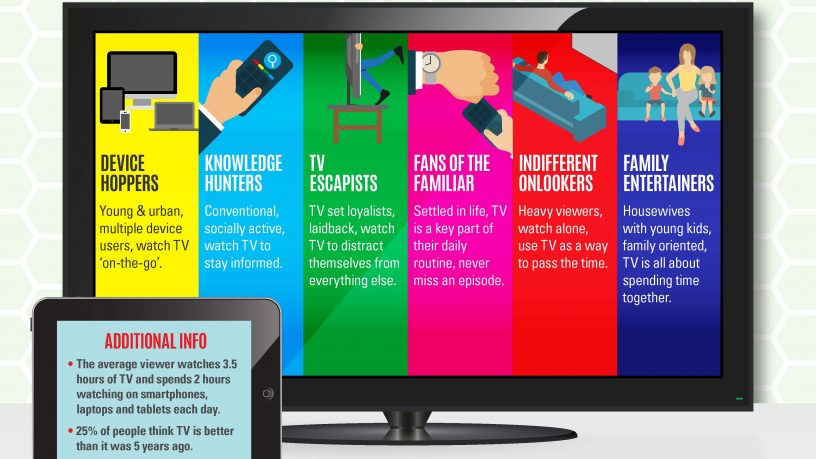 What you need to know about our changing TV habits

Over the past few years there has been much discussion over the ‘death of the TV’ linked to busier lives and in particular to increased use of different, especially mobile, viewing devices. Although individuals can now catch up on their favourite shows on commutes, or instead turn to on-demand platforms such as Netflix and Amazon Prime – the reality is that the ‘death of the TV’ simply hasn’t materialised.

At Clusters, we conducted a major new study into how individuals watch, seek out and feel about their TV consumption has revealed that people are watching just as much TV as ever, but now in very different ways and at different times.

We surveyed over 1000 individuals across the UK to find out their TV viewing habits and the results revealed a number of surprising findings. For instance, you might expect that what with the distraction of social media and the increasing trend of working longer hours, we’re watching less TV. However, we found that viewing remains high – with the average person watching three and a half hours of TV every single day – but that we’re altering where, how, and what else we’re doing simultaneously.

The traditional television set is not redundant, but viewing time is boosted by an additional two hours a day watching content on smartphones, laptops and tablets. This might sound high, but given the average commute time in the UK is 56 minutes1, you can easily slot in an episode or two of your favourite on demand shows.

This decision on where and how to watch has a direct impact on TV habits. We identified six clear ‘segments’, categorising them based on their motivations and barriers for tuning in. It seems that TV habits are driven by the number of devices in a household, not the number of TVs. For example, people we have defined as ‘device hoppers’ tend to be younger, often living in urban centres, happy to watch their content ‘on-the-go’. Their devices directly dictate their viewing decisions. Equally, those who are loyal to their TV sets are more likely to be ‘escapists’ who use TV as a distraction, and are crucially reluctant to engage in any other activity while they are watching.

Of course, we all have so much choice when it comes to TV. Almost any interest is now catered for. As a result of the analogue switch off across Europe, we noted increased viewing to niche genres at the expense of more mainstream genres like drama series and entertainment shows.

Similarly, due to a huge increase in the sheer choice of TV available to us, the way we refer to our favourites has also changed. Rather than stating genres as a favourite, we’re aligning ourselves more with the brand and ethos behind the channels themselves – so citing All4 as a favourite, rather than ‘Reality TV’ or ‘Crime documentaries’, for example. This is an incredibly powerful point for channels and brands, and suggests that the role of brands is important to signpost and recommend content as the wealth of choice increases.

Arguably the most surprising finding is related to how ‘good’ we think TV is. Naturally, we all have views on how the calibre of what we watch has evolved. On the whole, people think the quality of TV output is improving. 25% believe that TV content is better now than five years ago, with another 11% believing it is now a lot better. The only age group to disagree are the over 55s, with 35% stating that the quality is getting worse.

As the above statistics show, traditional segments whose routine revolves around TV scheduling still exist. These are more likely to be older viewers who tend to have been less exposed to modern ways of tuning in like smart phones and other devices – the ‘fans of the familiar’, if you will. However, as we move forwards, patterns suggest that this group will continue to decline in favour of more widespread segments using catch-up services across multiple platforms.

Want to learn more? Get in touch with us to hear further details on the results of the research, or to hear more about how we work with our clients. You can also read about our study on The Drum.